The Tyne Cot Memorial to the Missing forms the north-eastern boundary of Tyne Cot Cemetery, which is located 9 kilometres north east of Ieper town centre, on the Tynecotstraat, a road leading from the Zonnebeekseweg (N332).

The names of those from United Kingdom units are inscribed on Panels arranged by Regiment under their respective Ranks.​​ 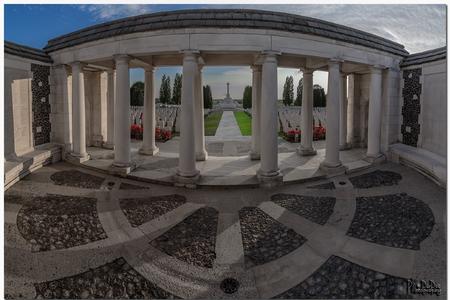 ​Edward John Richards Jnr. was a young man of 22 years when he joined the lodge as an entered apprentice on 21st September 1916. This was right in the middle of the First World War and our lodge records show his occupation to be a Corporal Bugler with the 3/9th HLI. He lived with his father at 400 Main Street Shettleston, modern day Shettleston Road. 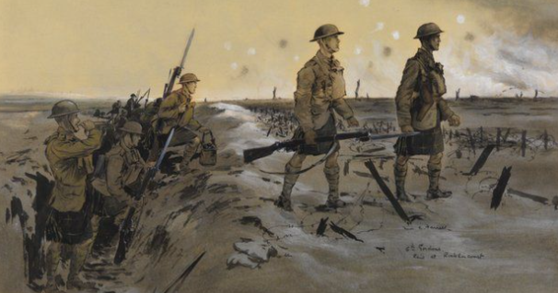 His father was Edward James Richards who was a founder member of Lodge Eastmuir his mother lodge being Lodge Scotia No.178, one of our sponsor lodges. Edward James attended a meeting on 19th August 1913 in the Academy Tea Rooms Shettleston, where those present discussed forming a new lodge. The founding members fee was 30 shillings which he paid.

Our charter was granted in November 1913 and Edward James affiliated to Lodge Eastmuir as a founding member on 21st January 1914. He was installed as Second Steward and our records show him as being aged 42. There is a note in our minute book stating that he liked to be known by his middle name Jamie. His occupation is shown as Foreman Joiner but we believe he may have had a family interest in a chemist shop in Shettleston Road. Interestingly the meeting in Academy Tearooms we believe to be Houston the Baker and this was next door to Richards the Chemists !

His son Edward John having been initiated on 21st September 1916 was passed on 15th December 1916 and raised 13 months later as a master mason on 17th January 1918. He was then posted to Flanders close to the France/Belgium border and was involved with some of the fiercest fighting experienced in the first world war.

The front lines had been stalemated for about 3 years when the German Spring Offensive began on 21st March 1918. The object was to have one great push to put the allies out of the war before the Americans could bring large numbers of fresh troops into the war. Following the Russian Revolution in 1917 and the withdrawal of  Russia from the war, the Germans were able to redeploy troops to the Western Front. The German commander General Ludendorff launched operation Michael in the Cambrai area and on the first day they fired three and a half million shells in just 5 hours.

The furthest point in the offensive was reached on 5th April. British losses were 160,000 of whom over 22,000 were killed. The German losses were roughly the same killed and wounded but fewer taken prisoner. They had advanced 40 miles at the furthest point and were within shelling distance of Paris.

It was then that what is now called the last German push to victory began with Operation Georgette launched on 7th April 1918 and was focussed in the Ypres area. The objective was to cut off the rail link to the channel ports which supplied the allied armies. The Germans had a huge advantage in terms of guns, men and aircraft.  Three to one in many places. Many allied troops were still mixed up in the retreat and had been fighting with remnants of various formations when on the 11th April the command to stand and fight or loose the war was issued by Field Marshal Haig. He insisted that every post be held to the last man.

Young Edward John was involved in what eventually proved to be one of the most important turning points in the war. The British line eventually held but sadly he was posted as missing six days later on 17th April 1918. He was serving as a lance sergeant in the HLI and gave up his life just 3 months after becoming a master mason.  As we now know the Germans had outran their supply lines allowing the allies with the assistance of thousands of recently arrived American Troops, to push on and eventually bring the war to an end.

Sadly there is no known grave for Edward John Richards Jnr. but his life is commemorated at Tyne Cot Cemetery near Ypres, along with thousands of others and on our WW1 war memorial plaque in the foyer of the lodge. Literally hundreds of people pass by this every week without giving it a glance. Perhaps the next time you are in the lodge you might take just a few moments to give thanks for the life of Edward John Richards and the thousands of other brave young men who gave up their lives serving our country.